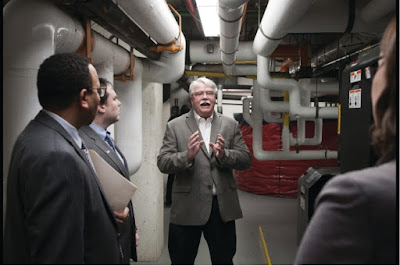 Sustainable development, construction, maintenance, leadership and education have come to the forefront over the past decade plus. We are proud here at Corcoran Management Company to say that we were one of the very first private management firms in the country to get aboard this initiative. 2008 saw with the construction of Parkside Commons, New England's FIRST large-scale multifamily apartment community to be recognized as LEED certified. Since that point, Corcoran's management and maintenance teams have worked with outside vendors and government agencies to learn and implement physical improvements to both older and newer communities that will help sustainability.

Last week, John Corcoran, Director of Energy Efficiency, along with Gary Saltmarsh, Director of Maintenance held a ceremony at Canterbury Towers, a 156-unit affordable community in Worcester to celebrate recogniztion from the US Department of Energy's "Better Buildings" initiative. A number of factors went into this award. Upgrades in new condensing high-efficiency boilers, LED light fixtures, energy saving windows, aerators on water fixtures and more attributed to Canterbury for being recognized for this honor. In addition, Gary and John work to provide extensive hands-on training for all of CMC's maintenance staff on the importance and procedures with energy efficiency.
CMC has also developed LEED friendly communities at The Commons at SouthField (LEED Silver), The Commons on the Green (LEED Gold), 50 West Broadway (Energy Star Recognized) and the newest community, MetroMark, will be seeking LEED Gold in the coming year.
To read more about CMC's sustainable efforts, visit our website!
Posted by Grace Corcoran at 10:00 AM No comments:
Email ThisBlogThis!Share to TwitterShare to FacebookShare to Pinterest 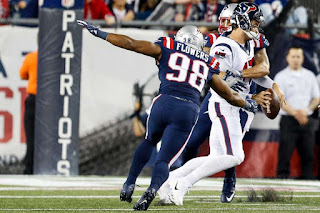 Alert! This is not a drill – there are just FIVE football games, college or pro, left on the plate for the 2016-17 season. Doesn’t it feel like yesterday was the 1st Sunday after Labor Day in which 32 NFL teams have aspirations of making a deep run a the Super Bowl? Well, we are here, and this weekend brings us three tremendous divisional round games, and one game that all but likely won’t be close (played down the street in Foxborough). As you sit back on your couch with friends and enjoy the full slate of Saturday and Sunday’s games, we suggest you whip up one of the following easy-to-make and delicious slow cooker recipes! [

Slow-Cooker BBQ Dip
Only 15 minutes of prep is all you need to create this amazing combination of two smoky and creamy cheese and chicken dips. All it takes is a red onion, cream cheese, shredded chicken, green onion, a variety of spices and a tin foil divider to separate your two dips! It’s perfect to put on the coffee table, finish the job with a bag of Tostitos scoops and you are all set!
FULL RECIPE HERE

Slow-Cooker Chili Mac ‘n Cheese Dip
Yes, this looks as tasty as it sounds. A bit more complex and might take a bit more time than the BBQ dip, but this is sure to be a smashing success. To start, combine canned chili, onion, cheese, cream cheese, hot sauce, and 1/3 cup of lager beer into the slow cooker. Cook for an hour on high. In another pot, bring water to a boil, and cook the macaroni until al dente. Then mix macaroni into the slow cooker and stir thoroughly. Serve with sour cream and cilantro.
FULL RECIPE HERE

Slow-Cooker Buffalo Ranch Wings
If you were putting together a power rankings of football foods, buffalo wings would be a mortal lock to be in the top 3. This particular recipe is easy as can be. Place the wings in a large slow cooker. In a separate large bowl, mix together buffalo sauce, ranch seasoning and season with salt and pepper. Pour mixture over chicken wings and stir to coat. Cover and cook on high 2 ½ to 3 hours. Heat the broiler, and broil the wings for 5 minutes until crispy, garnish with chives and ranch dressing.
FULL RECIPE HERE

Slow-Cooker Chicken Enchilada Dip
This is a perfect dish for enchilada and queso lovers. In the slow cooker, combine shredded chicken, enchilada sauce, pepper jack, cream cheese, jalapeno, and taco seasoning. Cover and cook on high for 1 hour. Stir until creamy, then cook, covered, on low, 30 minutes to 1 hour. Serve with your favorite brand of chips!
FULL RECIPE HERE

The internet is a vast place with thousands of amazing slow cooker style recipes. For more, be sure to check out Delish! Enjoy the games, and Go Pats!
Posted by Grace Corcoran at 10:48 AM No comments:
Email ThisBlogThis!Share to TwitterShare to FacebookShare to Pinterest
Newer Posts Older Posts Home
Subscribe to: Posts (Atom)