There is no time of the year in Boston quite like an October in which the Red Sox are primed for yet another World Series title. After last night’s 8-1 dismantling of the St. Louis Cardinals, the Red Sox are just three wins away from bringing home their 8th World Series Championship in franchise history. 2004 and 2007 saw generations of Sox fans, both young and old, take to the streets to cherish what was once viewed as “the title that will never come”. While both celebrations were peaceful for the most part, Boston Police and surrounding law enforcement officials have had to break up unruly crowds and make arrests on various individuals. This year, Mayor Tom Menino, in partnership with MLB, The Red Sox and Boston Police has released a series of rules and regulations to help control crowds and residential parking.

GO SOX!
Posted by Grace Corcoran at 4:38 PM No comments:
Email ThisBlogThis!Share to TwitterShare to FacebookShare to Pinterest

Experience the 2013 Head of the Charles Regatta!

Each October thousands of athletes from nations all across the globe make their way to the banks of the Charles River to partake in the world famous Head of the Charles Regatta. Since its inception in 1965, the Head of the Charles has been known as one of the world’s finest and most inviting rowing races for both competitors and spectators. The 2013 race takes place this Saturday and will finish up on Sunday. The HOCR course consists of a 3-mile row that will challenge the physical and mental strength of each athlete. Rowers will begin near the DeWolfe Boathouse located right before the BU Bridge spanning the Charles River. After passing five additional bridges within the next three miles the rowers will cross the finish line near the Cambridge Boat Club.

What makes the Head of the Charles such a special event? Every athlete, no matter what finishing position, will forever remember their row from Boston University past Harvard and down toward the Cambridge Boat Club. The thousands of spectators who cheer on their friends, family and alumni participating in the race enjoy the natural fall beauty along the historic banks of the Charles River. If you are around the Boston area and looking for something to do before the Red Sox game, you would be hard pressed to find a better option than taking in the Head of the Charles. There will be fan favorites in both food and drink vendors from all throughout Boston. If you’re looking for more information be sure to visit the official website of the Headof the Charles!
Posted by Grace Corcoran at 12:17 PM No comments:
Email ThisBlogThis!Share to TwitterShare to FacebookShare to Pinterest 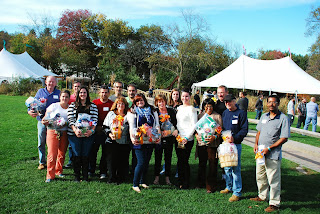 On October 8, over 250 of CMC’s professionals gathered for a day beautiful October sun, delicious food, golf activities, arcade fun, batting cages and honoring fellow employees for achievements in management, leasing and maintenance. For yet another year Kimball Farm served as fantastic venue for our company outing.

First thing in the morning the 9-hole pitch-n-putt tournament brought out serious competition. The foursome of Jeff Callahan, Fred Cook, Bob Dixon and Marc Colburn finished in first place by shooting a 26 (2 under par). Leo Fitzpatrick and Cynthia Buckley won prizes for being closest to the pin on the last hole. In the longest drive contest Jared Gardner and Bethany Hollingworth took top honors for men and women. The newest challenge, the Corcoran bag toss, was a huge hit. Don Polsi of Stevens Corner took home the first prize while Scott Condon and Dave Sadowski finished 2nd and 3rd respectively.

After enjoying the activities and games at Kimball many of Corcoran’s employees were honored for their years of dedicated service and commitment to professionalism.  To round out the day many lucky employees walked away with gift baskets and door prizes.  Chuck Miles won the coveted 50/50 drawing with the other half of the money pool reserved for St. Mary’s Bridge Home.

Thank you to all employees who attended another great company outing at Kimball Farm. Even bigger thanks go to the Outing Planning committee staff for organizing such a fun event! We hope to see everyone at the Holiday Christmas Party, which believe it or not, is just right around the corner!
Posted by Grace Corcoran at 1:39 PM No comments:
Email ThisBlogThis!Share to TwitterShare to FacebookShare to Pinterest

Breaking Ground for The Commons on The Green! 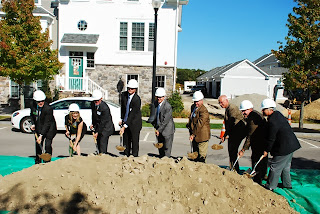 By the time next year’s summer heat wave hits the Boston region, The Commons on the Green, the newest phase of luxury apartment homes at SouthField will be welcoming home its first residents! On Tuesday, John M. Corcoran & Company, in partnership with development partners LNR and Whitman Homes and local officials broke ground on 72 brand-new luxury apartment homes on the site of the former Naval Station off of Route 18 in South Weymouth. Once completed in the summer of 2014 John M. Corcoran will have 298 high-end apartment homes available for rent at the SouthField community.

The Commons on The Green, along with its predecessor sister community The Commons at SouthField Highlands present a luxury apartment home lifestyle to the SouthField community. The Highlands opened their doors to their first move-ins back in the spring of 2012. Almost eighteen months later and the Commons at SouthField has achieved superior success in fulfilling financial goals, serving as an ambassador to the Weymouth community, and most importantly, offering a community atmosphere for residents to call their own.

Corcoran President Rick High, State Secretary of Housing and Economic Development Gregory Bialecki, and South Shore Chamber of Commerce CEO Peter Forman delivered a series of speeches referencing the strong growth seen at SouthField, and the bright future ahead. After the honorary shoveling ceremony to officially “break ground”, all those who attended sampled delicious treats and refreshments catered by Whole Foods Market.

The brand-new Commons on The Green will have unique features and finishes for residents. Apartments will come with wood flooring, dual sinks, granite countertops, valet trash service, and ice makers. A private roof deck is fully furnished and will be perfect for residents looking to enjoy an outdoor book or magazine. There will also be a grilling patio and fire pit area for cooking up your favorite foods with friends!